To create, share, inform and update. Our blog provides information around mental/emotional health 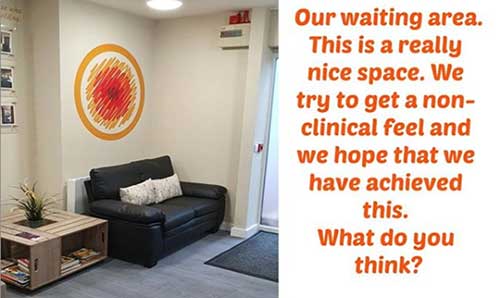 Back in November 2018 we discovered the perfect building for us to move to in order to address the increasing demand for our services. Over the course of 2019 we endeavoured to secure the lease for it, which was finally achieved in October 2019. During this period, we spend a considerable amount of time identifying a suitable building company, not only to carry out the works but who would also be able to help us reconfigure the existing building. Supreme Building Solutions rose to the top of our perspective candidates for the job. What attracted us was not only because of the positive recommendations about their work, or their wealth of experience, but also because they were attentive and responsive to what we were saying and helped us to formulate a design that would meet the variety of requirements the charity had. No soon as we signed the lease the work got underway.

Many of you may have following the progress of the development on Instagram and our Facebook where we posted many pictures over the past 3-4months. After the protracted length of time we had spent waiting for the lease to be drawn up and approved, it was very satisfying for us to finally see the place taking shape. Of course, whilst the work was going on, we were still busy ensuring the charity continued to provide the services so desperately needed. We wanted to try to make the move as undisruptive for both our clients young and old, and our therapists, as we could. This meant preparing them as far in advance as possible for the impending move and working on ensuring as an agency we provided as much continuity as we were able.

Understandably Supreme Builders needed us to keep the entire site free from furniture for the duration of the build and this posed a problem for us as our old centre was half the size of our new one and with all the kind donations from our supporters, we needed to store the new equipment such as furniture and other resources at the New Barnet venue right up until we moved. By December we could hardly move for cardboard boxes containing, toys, paints, clay, puppets, play dough, lights, tables, chairs mats and rugs!

Meanwhile with Christmas looming, snags preventing the building being completed on time caused sleepless nights and frazzled nerves for all concerned and our planned opening date appeared to be in jeopardy, threatening all our attempts for as little disruption to the RH services as possible.
A monumental effort was made by everyone involved from the painters, joiners, floor layers and suppliers, to the therapists, administration team and management - resulting in us being set up and ready for work on the 11th January 2020. Prior to this we have also planned an open afternoon on Thursday 9th January and completion went to the wire with the final pieces of furniture being delivered at bang on 3pm on the 9th January, the exact start time of the open afternoon! At least we had some willing volunteers in the form of guests to assemble these last 4 chairs!

We would again like to thank all those involved in helping us to achieve this move and our promise to everyone is to optimise this resource for the good of the surrounding communities by providing effective and timely interventions to those in need of therapy.